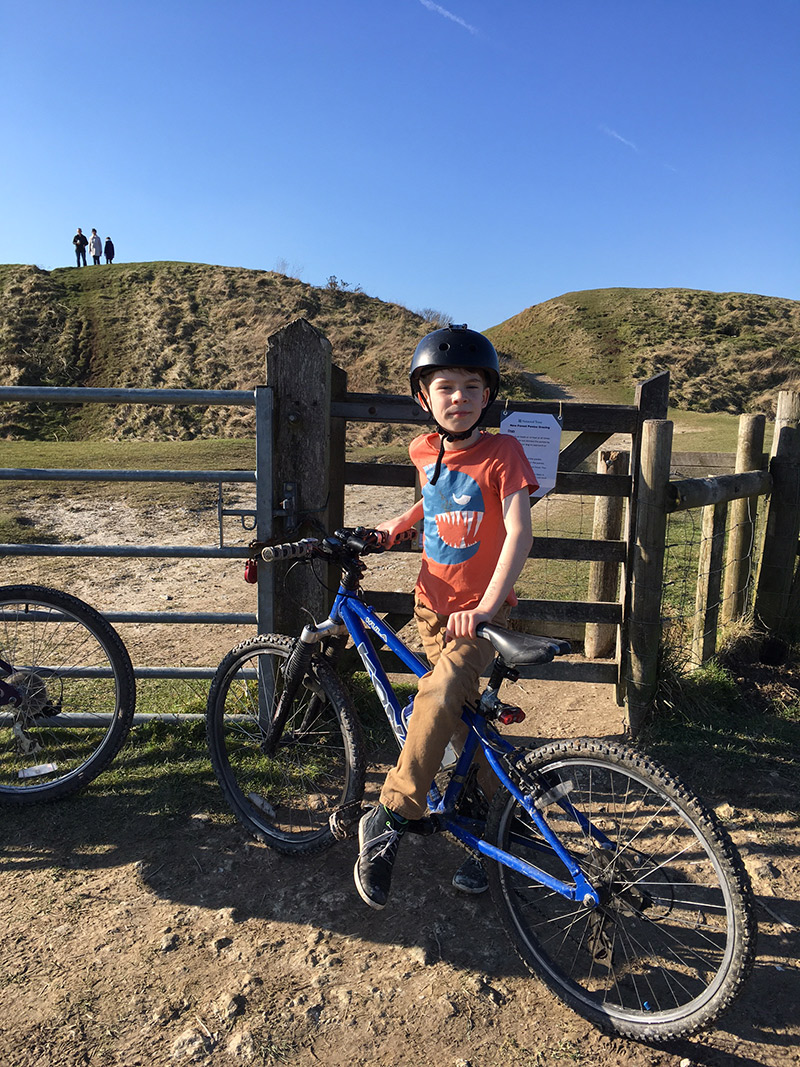 Inspiration for our February microadventure came from the brilliant Alastair Humphreys.

Jay and I decided to do this one together; a mother and son adventure. Our plan was to take a journey from summit to sea. After a few investigations I found a pretty good cycle route from Cissbury Ring up in the South Downs. From there we could ride down to the sea at Worthing or Lancing. It would mean negotiating the town on our bikes but I feel pretty confident with Jay’s road cycling abilities these days, so we decided to go for it.

Naturally the majority of ride was downhill, so not particularly challenging in the physical sense. This microadventure was all about the journey; travelling from lofty heights in the hills down to meet the ocean. That was the appeal, a journey with a point, just for the hell of it. A journey in this case of about 6 miles so.

We managed to squeeze into the tiny parking area close to the top of Cissbury Ring and offloaded the bikes. Jay amused himself riding through muddy puddles while I guestimated the correct path according to my map. It wasn’t too difficult; they all seemed to lead to the top, but I didn’t want to choose the steepest route with bikes to get up there. We had struck lucky with the weather; the sun was beaming in the most glorious azure February sky. We set off uphill cycling and pushing our bikes around the curve of the summit and up to the top of our ‘peak’. Abandoning them at a gate we ran up to the highest point, the grass covered and windswept ancient defensive walls of Cissbury Ring. I admired the view and snapped away while Jay took the opportunity to race down the slopes with legs almost running away from him. 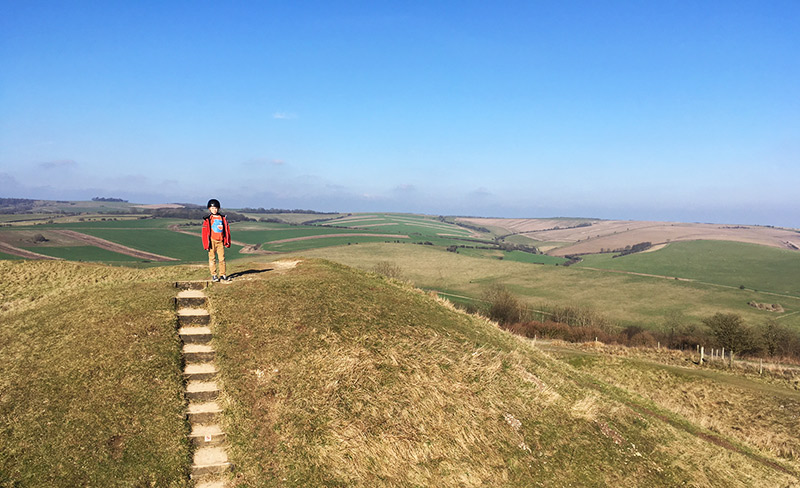 Cissbury Ring is an Iron Age hill fort dating back, it is estimated around 3000 years. It’s the second largest hill fort in England and is an incredible spot with far reaching views over glorious downsland in all directions as far as the eye can see. The sea sparkles away to the south. On a clear day you can see as far as the Isle of Wight, and east to Beachy Head. There are grassy ramparts to climb and explore around the edges, commanding the breathtaking vistas, before you begin your descent seawards. It’s easy to see why it was an excellent spot for a defensive fort, being the highest point in Worthing borough. 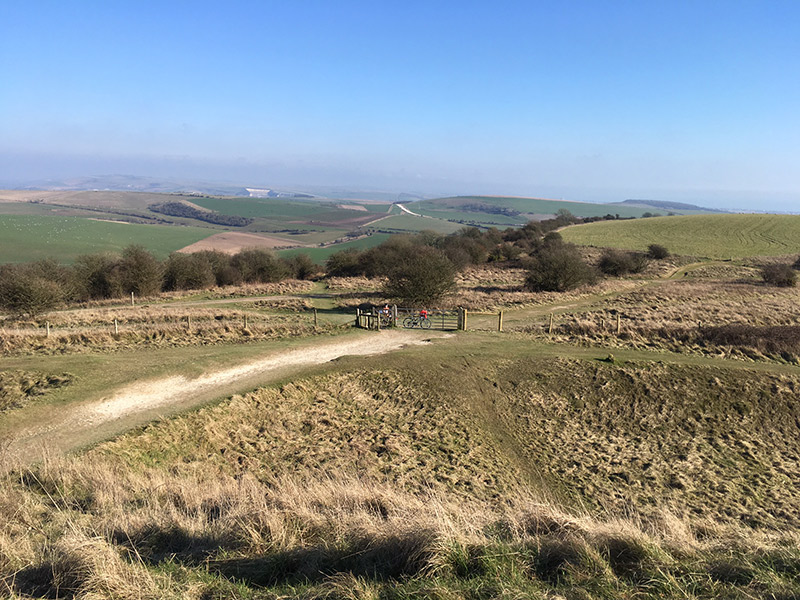 Once we set off it became apparent that I was outpaced, as I gingerly bumped at what felt like top speed down the track, watching Jay’s back rapidly disappearing into the distance. “Why are you going so slow?” He shouts back… well my derrière is taking a pasting for starters. It was good fun though, for a brief moment I felt like a proper mountain biker (which I’m not!) as we zoomed downwards through the sunny rolling hills and on past a golf course. 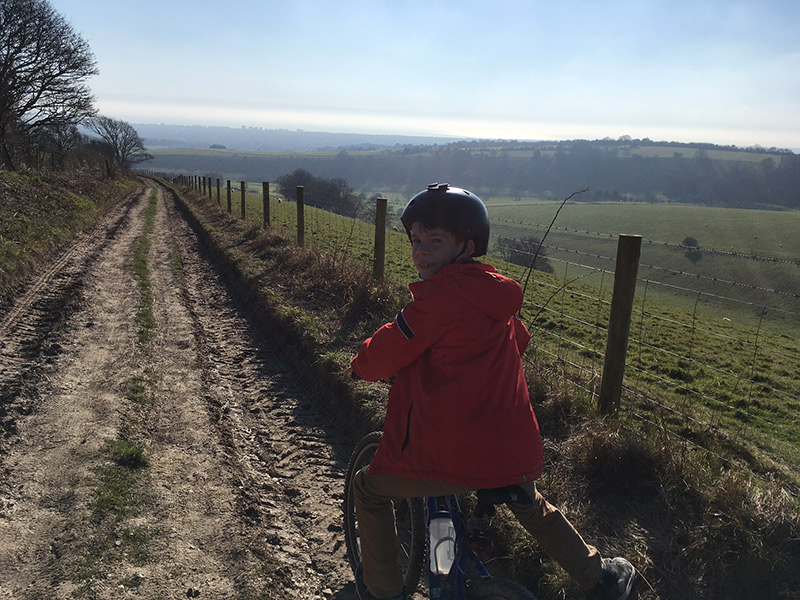 Further along we negotiated a flatter, stonier path, winding cautiously around the odd dog walker before coming to the end of the downland and hitting the tarmac at the top of Worthing town. We had decided to make our end point in Lancing, meaning we could avoid some of the busier roads through town and meet the others at our favourite cafe for refreshment. We pressed on through the busy streets. The traffic wasn’t too bad, although there were a few points when we cycled the wide pavements for a short stretch in order to avoid the more chaotic sections. Finally we reached the seafront cycle path and whizzed along with the stiff sea breeze at our backs, hastening the way to our cafe destination. 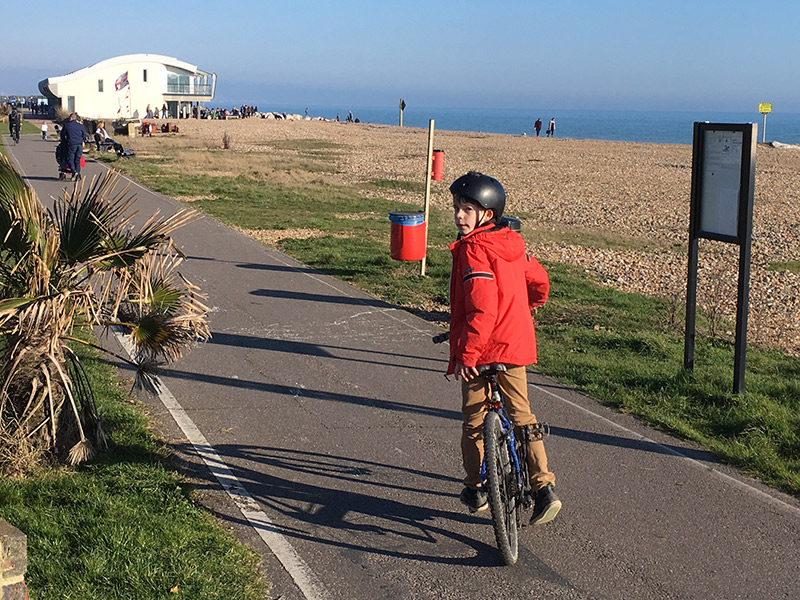 Sitting on the beach in the warm sun at the end of our ride, enjoying a cuppa (and a coke), I reflected on the enjoyment of our simple quest. Jay loved speeding downhill; the thrill of the ride made this microadventure memorable for him. I revelled in the time spent admiring gorgeous scenery in my two favourite environments; up in the hills and down by the sea. With the sun shining and the promise of spring in the air, being outdoors doesn’t get much better than that… 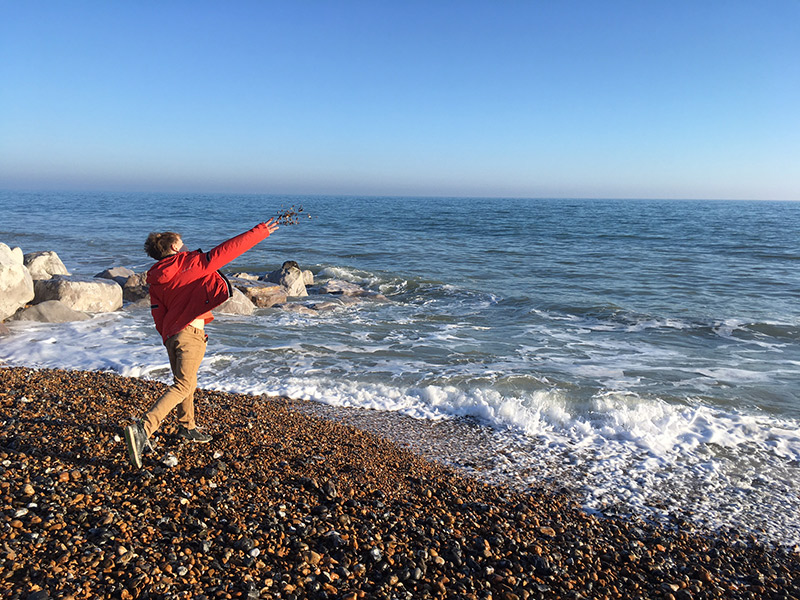 Remember the heady days of endless childhood summers, when you might spend an afternoon building…

This site uses Akismet to reduce spam. Learn how your comment data is processed.

LATEST FROM THE BLOG

If you buy through my affiliate links it helps me out. I’ll probably spend the small commission on this blog, or maybe tea/wine (delete as appropriate according to time of day). I only link with products I think are genuinely awesome!

JOIN OUR TRIBE OF ORDINARY ADVENTURERS

FACEBOOK
FOLLOW US
ABOUT
Good to meet you, I’m Chloe. Join our mission to become more adventurous! This blog is about simple family adventures, family travel and making the most of today. We want to get out there and challenge our limitations! I hope you will find here a growing hub of encouragement and useful information to help motivate and inspire you to go and create more of your own micro or indeed great big adventures, travel stories and treasured family memories. READ MORE
Copyright Now on Earth - All Rights Reserved. TERMS AND PRIVACY . CONNECT WITH US
Back To Top
×
This website uses cookies to improve your experience. We'll assume you're ok with this, but you can opt-out if you wish.Accept Read More
Privacy & Cookies Policy
Necessary Always Enabled