The second smallest of the Canaries, La Gomera is an almost circular island of steep volcanic terrain and verdant palm filled valleys tumbling down to clear azure seas. Only around 25km in diametre, the jewel in it’s crown is Garajonay National Park which is characterised by volcanic peaks draped in ancient Laurisilva cloud forests. The whole island is crisscrossed with over 600km of walking trails, making it a hikers paradise rich in endemic plant and wildlife. It was awarded UNESCO Biosphere Reserve status a few years ago, in recognition of it’s pristine ecosystems and unspoilt flora and fauna. Less easy to access than the main islands, it is perhaps understandably off the mainstream tourist radar, which isn’t a bad thing. The easiest route is to fly to Tenerife (South), hire a car and drive onto the ferry which runs twice a day from the south of the island. But, although I’m somewhat reluctant to admit it (as I’d like to keep this secret slice of quiet paradise… well, quiet), it’s well worth the extra time to get here. 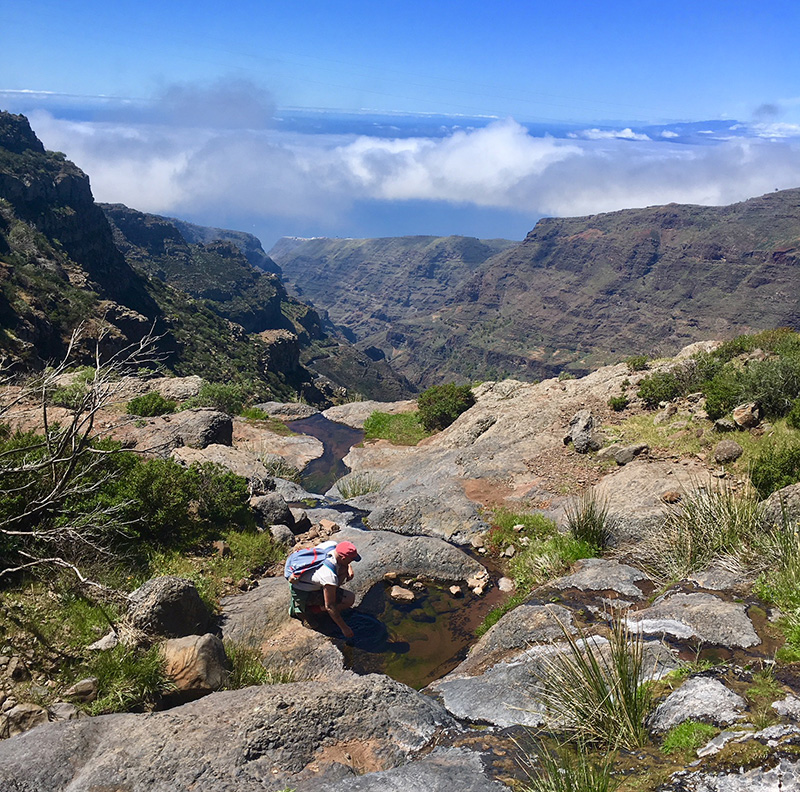 We arrived in this Eden on a gloriously warm April morning, after a somewhat stomach churning ferry crossing (with nose pressed against porcelain). We’d chosen a convertible hire car, rashly as it turned out, as unbeknown to us rockfalls along the roads are a regular hazard. With warm breeze and hot sun on our faces we negotiated multiple hairpin bends, winding up and out of the port capital San Sebastian de la Gomera. Frequent stops were made to gaze at the abundant unfolding vistas, and to avoid plummeting off the dizzying roads in our distraction. We could have been in deepest South America, as we roller-coastered around the island passing through banana plantations, tiny traditional villages with barely a soul in sight and up through misty-and-mysterious forests strewn with moss. Tantislising paths dove down from the roadsides, offering glimpses into ancient fairytale woodlands that might well be home to elves and fauns. Other vehicles or indeed people were a rare sight. 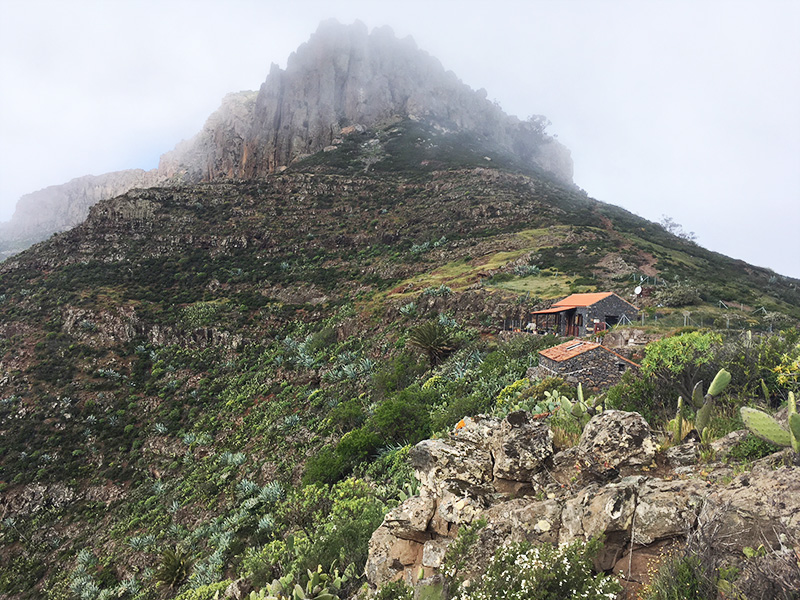 Our AirBnB necessitated a 50m luggage haul up a stony mountain path, well worth the effort as it turned out. What greeted us was solitude, total quiet… a grown-up haven of peace only broken by the happy buzzing insects and the tinkle of the odd goat bell. The cottage was perched mountainside, overlooking a tiny village far below, which clung to the opposite side of the craggy valley. Best of all there was a 20 minute scramble from the doorstep up to the top of a once mighty volcano, a fine pre-breakfast activity if ever there was one. 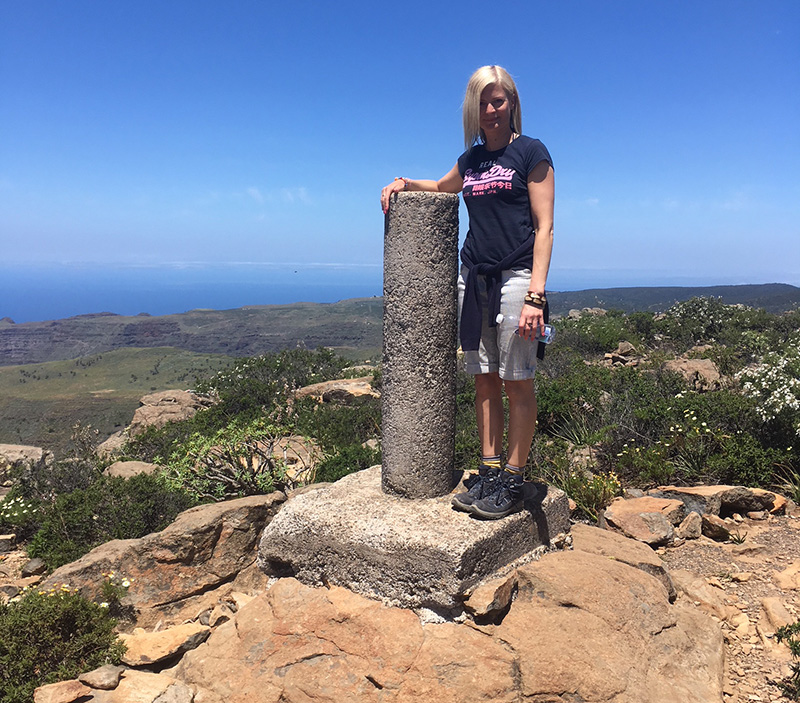 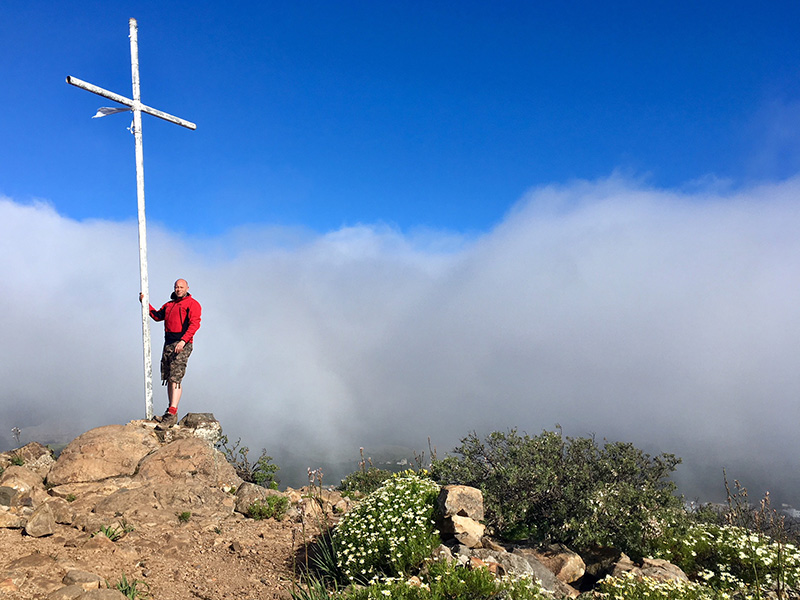 La Gomera, like the rest of the Canaries, enjoys a year-round mild temperate climate, bathed in the trade winds which push the clouds around the peaks and are responsible for the dense, jungle-like forests at higher altitude. It even has it’s own whistling language, Silbo Gomera, which dates back thousands of years; a sensible way to communicate across the valley divides of the island in days gone by. If you are lucky you will still hear the odd refrain echoing across the timeless landscape whilst out on the trails.

The main tourist hub on the island is Valle de Gran Rey, a lush ravine dotted with pretty pink-roofed homes offering a range of accommodation and hotels, running down to volcanic black sand beaches. Pretty low key in comparison with the rest of the Canary Islands, it has a relaxed and laid-back vibe. Agulo on the north of the island is also worth a stop, a petite and very charming town, one of the oldest on La Gomera with cobbled streets and many examples of traditional Canarian architecture. It’s naturally elevated centre gazes out over the Atlantic towards Tenerife’s imposing Mount Teide. 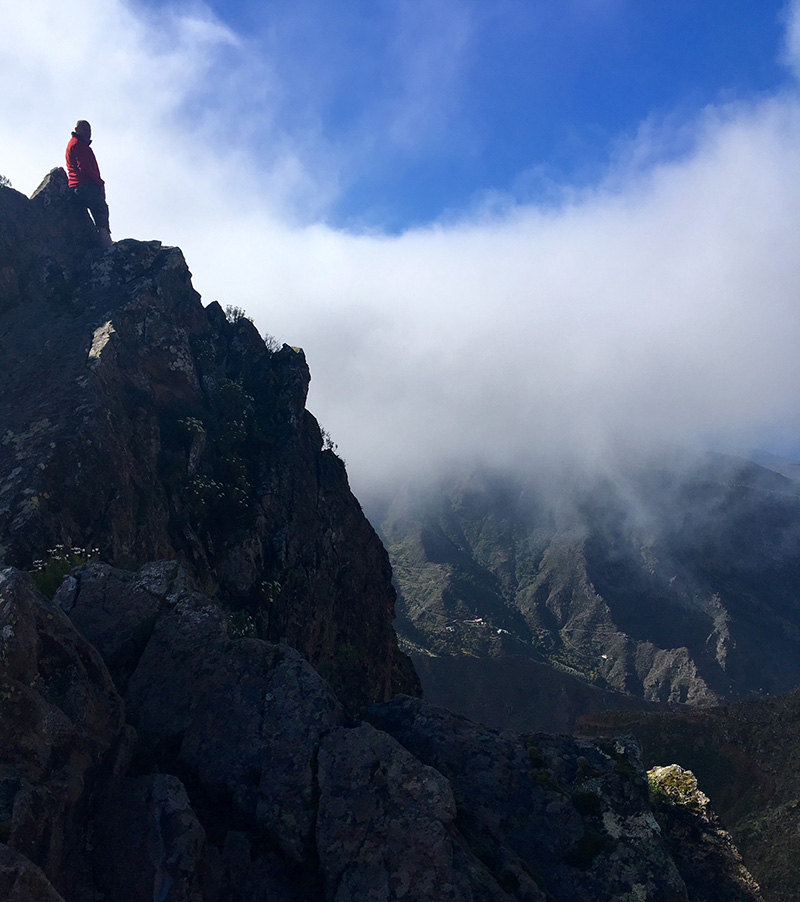 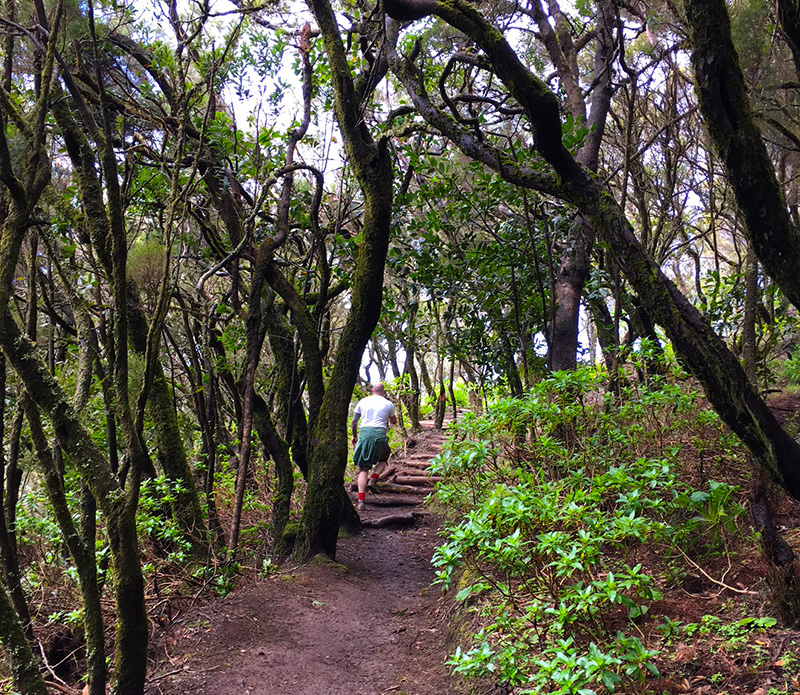 Our spell of natural immersion rolled gently by punctuated be morning meditation and yoga on the precipitous terrace, wanders into the village for refreshment and the gloriously rugged hikes (guided by the very useful Komoot App). The trails were well marked and easy to follow. On our explorations we stumbled across the odd group of mostly German hikers, a friendly smallholder (who tried to persuade us to join him supping the local home-brewed vino – a somewhat acquired taste) and an abundance of verdant and vertiginous scenery. Truly the land that time forgot. We basked in it’s natural beauty, watching Buzzards circle the thermals and goats dance daredevil up and down the vertical rock facets. 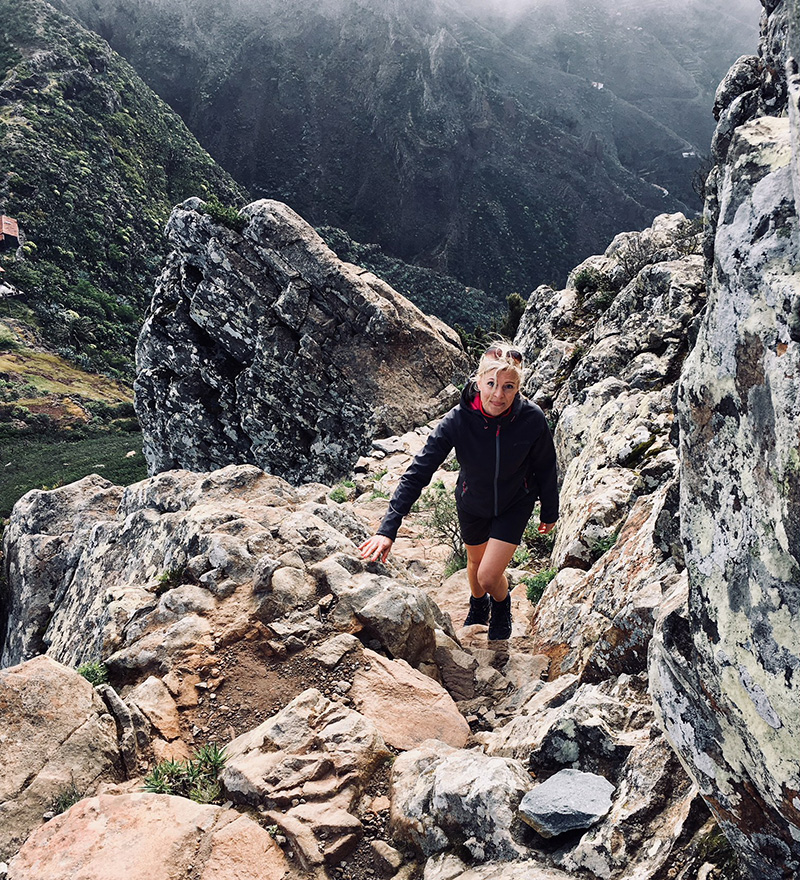 Reluctantly our too few days came to an end and normal life beckoned us home. We returned renewed (aside from a dodgy ankle aggravated by the stony terrain) and a little evangelistic. A good trip should do that I think. La Gomera is a jewel, rightly known as ‘The Green Pearl of the Canaries’. A sublime, year-round retreat from modern life within easy(jet) reach. Just promise not to spread the word too far… 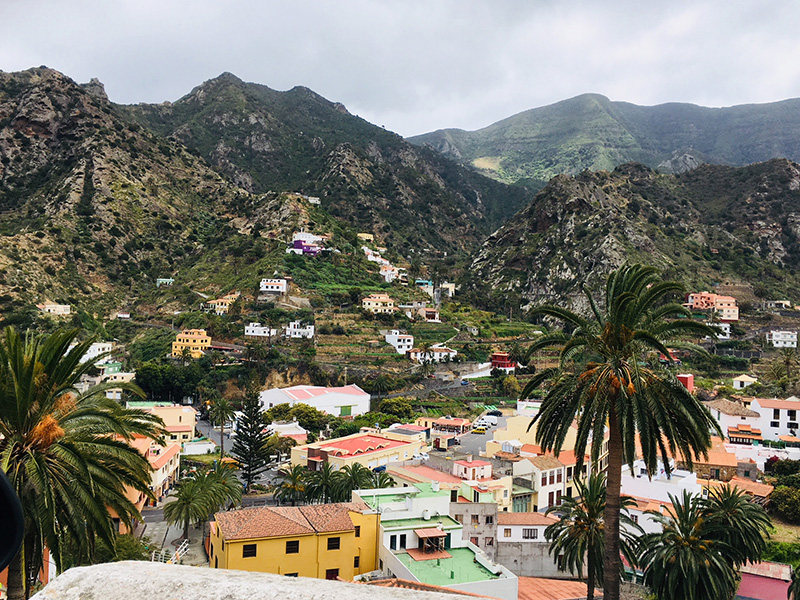 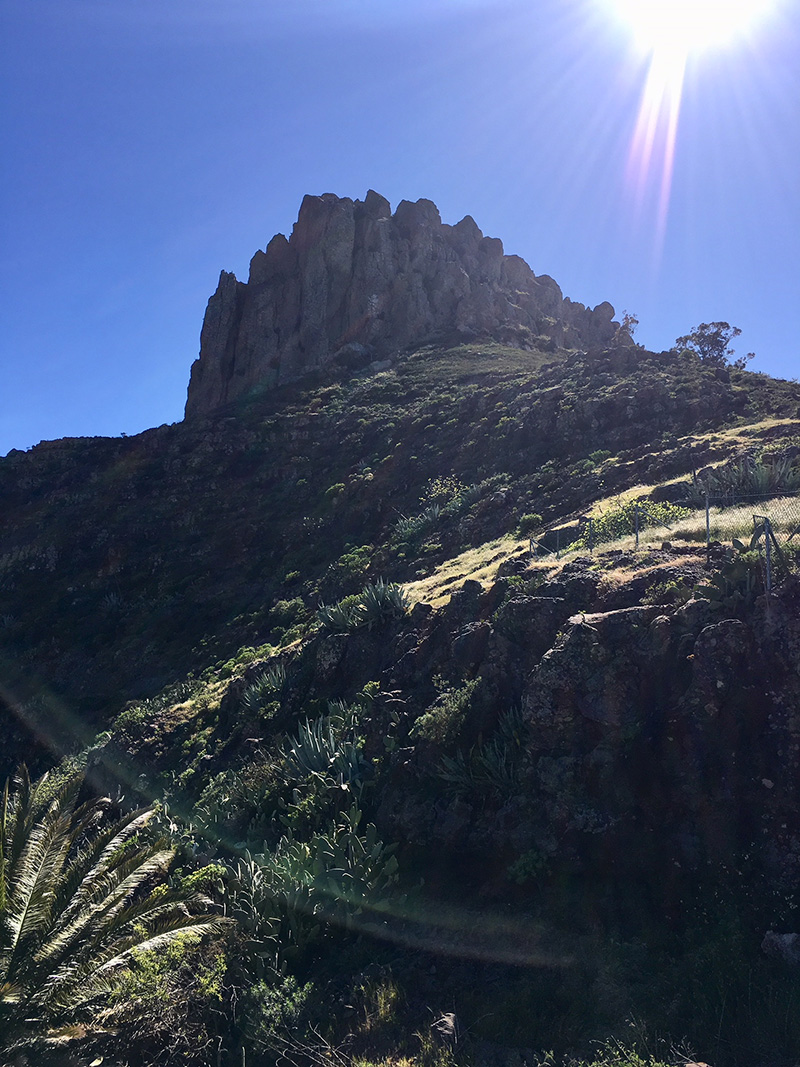 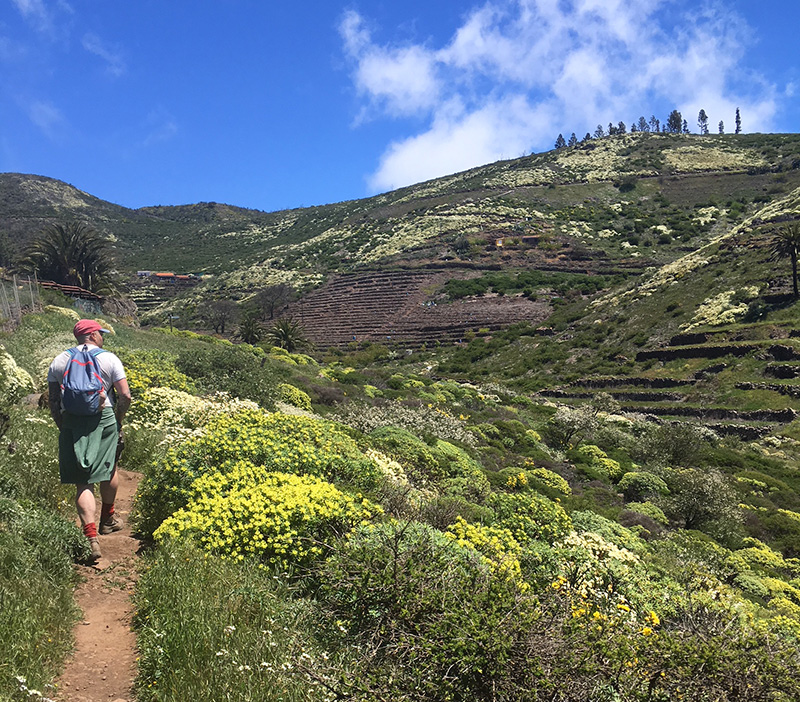 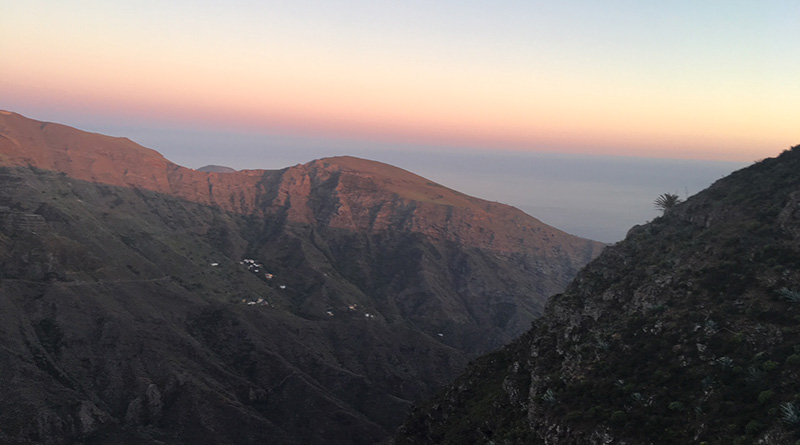 Flights from the uk to Tenerife:

Ferries from Tenerife to La Gomera: